Wide eyed and intelligent student Vilé moves from the Lithuanian countryside to the city keen to start a new degree. Unable to afford the rent in desirable downtown, she finds a room in a notorious council estate district. Her landlord is the mysterious Sandra — renegade, punk and anarchist. Despite their differences, the unlikely pair become fast friends, and under Sandra’s protective wing, Vilé sheds her provincial shyness and begins to immerse herself in the underground politics and gangs of Vilnius. Yet as the women’s relationship hots up, hidden truths begin to surface, resulting in a fiery denouement where tables are turned and scores settled.

ANARCHY GIRLS caused much controversy upon its release in Eastern Europe, not just for its brazen depiction of a rebellious Lithuanian youth, but as the first film to ever come out of Lithuania depicting a sexual relationship between two women.

On DVD from peccapics.com and at Amazon.co.uk 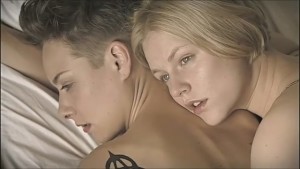