Arizona/Callie: Arizona arrives at the hospital for her first prosthetic fitting with Dr. David Moore (played Ethan Embry of one of my all-time favorite movies, That Thing You Do!). She’s just as bitter as she has been for months, making Callie promise not to tell anyone she’s there and being difficult with Dr. Moore. But Alex accidentally finds out she’s there, and that she doesn’t blame him for the amputation, as she doesn’t even know he did the actual cutting. He pays her a visit, in time to catch her as she falls of the prosthetic due to her stubbornness to accept help. When he compliments the healing wound and tells her she needs to come back, she says she is trying. He replies that Callie is as well. It’s enough to mellow Arizona a bit, where she begins to work with Moore and *finally* gives an inch with her suffering wife. The two watching American Bake Off with a mile between them on the couch isn’t a total reconciliation, but it is enough to presumably keep Callie from spending another night sleeping in her dead best friend’s bed instead of their own. more Callie and Arizona Scenes here. 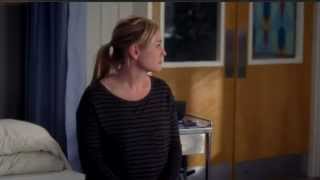