Sophie Lauren Webster is a fictional character in the British television ITV soap opera Coronation Street. She is currently portrayed by actress Brooke Vincent, after previously being portrayed by both Ashleigh Middleton and Emma Woodward. The character first appeared onscreen during the episode airing on 4 November 1994. In 2010 she became the show’s first lesbian character, having fallen for best friend Sian Powers (Sacha Parkinson).
Images | Videos | Watch 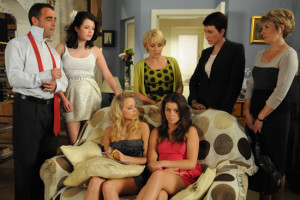