The Other War – Full Film from Tamar Glezerman on Vimeo. 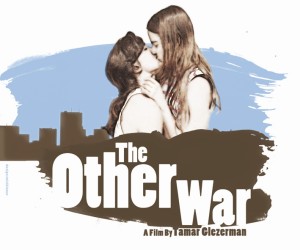 The Other War is a 43-minute-long Israeli fiction film that tells the tale of Tel-Aviv during the second Lebanon war (2006). It has gotten a lot of media attention for its straight forward take on the topics of Israeli and lesbian identity, and has traveled festivals worldwide, as well as been regularly screened at cinematheques and art house cinemas in Israel.
source: onemorelesbian.com

In the middle of a war, three women fight for a normal life, but can never seem to agree on the meaning of normal. “The other war” tells the tale of Tel-Aviv during the second Lebanon war. It’s a film about Tel-Aviv, Militarism and denial, but mainly about love.