Recruited by the U.S. government for their unique ability to lie, cheat and fight, Amy, Max, Janet and Dominique join an underground academy of secret agents known only as D.E.B.S. Their most important mission- to capture vexing vixen Lucy Diamond, the deadliest criminal the world has ever known. When DEBS. star player, Amy, falls for Lucy, chaos erupts and the D.E.B.S. loyalty is put to the test. 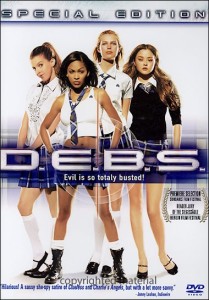