Portia de Rossi is openly lesbian. Portia de Rossi began dating talk show host and comedian Ellen DeGeneres, whom she met backstage at an awards show. In 2005. She became engaged to DeGeneres after the talk show host proposed to her with a three-carat pink diamond ring. They were married on August 16, 2008 at their home, with 19 guests including their respective mothers. 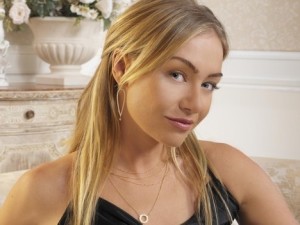